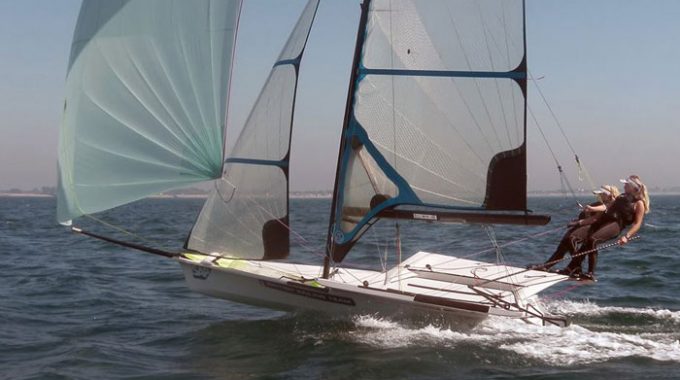 RYA racing have recently launched the High Performance Club Coach programme, a new initiative to fast track youth sailors into the Podium Potential (formerly Development) Squad. The first club in the programme is Hayling Island. The RYA approached Mark to be the first on site coach for Hayling.

Transitioning from Youth to Olympic sailing classes can be a big step. The RYA High Performance Club Coach scheme helps to fast track young sailors through these early stages of the learning curve.

Youth sailors can be nominated for HPC funding by their squad coaches. One of the benefits of the scheme is that the youngsters can receive highly bespoke coaching to work on specific areas of focus relevant to their current experience. It also means they can train from home, or near home, rather than having to travel away to squad camps.

First up was a coaching session with local sailor Vikki Payne and crew Steph Orton, as they started out in their new 49erFX Olympic campaign following a successful couple of years in the 29ers.

Sessions are booked through the RYA racing department, and can be run for individuals or small groups.  They are mostly timed during half term or school holidays.

“Tell me and I will forget, show me and I may remember; involve me and…

Racing rules of sailing 18.3 - Tacking Inside the Zone at the windward mark -…

An epic passage, a warm welcome, a racing area with new challenges and different…

Recent Posts
Make a difference to your sailing
Get In Touch
Copyright Rushall Partnership. - All Rights Reserved