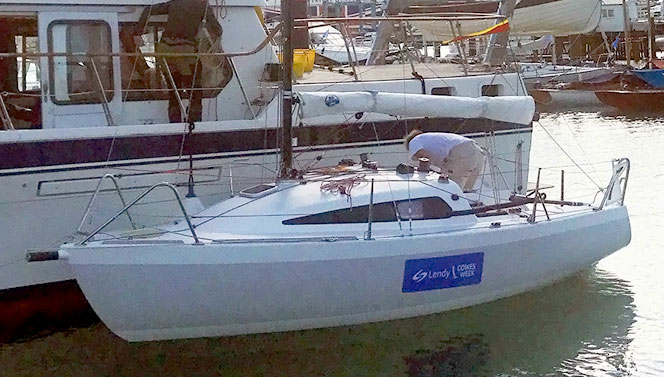 I left the rib at home and raced a couple of days of Cowes week last week with old friend, prolific boat designer, and Olympic medallist Jo Richards. In a pile of scrap behind Radcliffe on Soar power station, Jo thought he had found a “Vivacity”: a classic 20 bilge keel cruiser from the 1960’s. Instead, when he got it home, he found that he had the baby sister: the 18ft 6inches “Alacrity”. 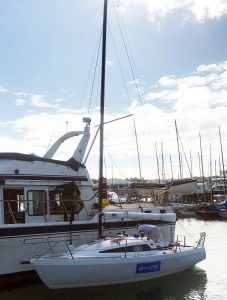 Typical Jo alternative thinking saw him cutting the bilge keels and deck off: “I had an old fin keel and deck from “Moo”: a slightly bigger boat in my workshop”…”Eyeore” was born. Now all Jo had to do was scrounge a “cosmetic second” Elite rig from Selden, and get a dispensation from Cowes week organisers to enter a boat below the minimum 20ft hull length.

Racing the smallest boat in the regatta was an absolute hoot. In the big breeze she planed like a thoroughbred (if a little nose down!) and easily held her own against the bigger boats. Upwind against the tide it was equally entertaining hopping around the rocks no-one with a draft over our 1m dare go. Our last run in 30k, the only boat left standing with the kite up, with the three of us giggling all the way to the line will stay with me for some time. Many thanks, Jo, Duncan, and “Eeyore.” 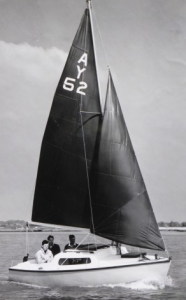 “Tell me and I will forget, show me and I may remember; involve me and…

An epic passage, a warm welcome, a racing area with new challenges and different…

RYA Tactics has gone to the printers!

As Douglas Adams said: "I love deadlines: I love the swooshing noise they make as…

Recent Posts
Make a difference to your sailing
Get In Touch
Copyright Rushall Partnership. - All Rights Reserved